Interesting Numbers in the Trucking Industry 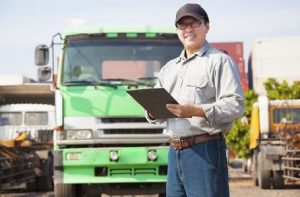 Dunkin’ Donuts has had a tagline for years that you’ve probably heard: “America runs on Dunkin’.” The company is selling the idea that coffee is fuel, and Americans need it to live. Well, that may be true in some respects, since many people start their workdays with a cup of coffee from a place like Dunkin’ Donuts, but there’s something else that makes America run, and that’s the trucking industry. If the trucking industry had a tagline, it would be something like “The lifeblood of the U.S. economy.”

Did you know that over 70% of all the freight tonnage moved in the U.S. goes on trucks? Over 10.5 billion tons of freight gets moved every year thanks to more than 3 million Class 8 trucks and their drivers. Are you wondering how much fuel all those trucks use to haul their loads? Do you think it’s a) 15 billion b) 38 billion or c) 50 billion gallons of diesel fuel? If you guessed 38 billion, you got it!

The trucking industry is vital to life in America as we know it. If truckers were to stop driving goods from town to town, there’d be no Wal-Mart! Furthermore, shops would have bare shelves. People would not get the food they needed or wanted. If the trucking industry stopped tomorrow, so would America.

Truckers are really good for the U.S. economy. When it comes to taxes, commercial trucks contribute about $40 billion a year to state and federal coffers. Commercial trucks make up more than 12% of all registered vehicles on the road. There are upwards of 31 million trucks registered for business purposes, with three and a half million Class 8 trucks in operation. Ever wonder how many miles all those trucks travel per year? If you were to add up all their trips, the number would be in the billions. Going back to the year 2014, for example, there were 279.1 billion miles travelled by all registered trucks along with 169.8 billion miles travelled by combination trucks.

All those trucks on the road mean there are plenty of trucking companies to work for, including some 747,000 private carriers, 586,000 for-hire carriers, and 144,000 interstate motor carriers. Meanwhile, international trucking, which includes trips between the U.S. and Canada as well as the U.S. and Mexico, helps fuel America’s export economy to the tune of $700 billion and then some.

Perhaps the tagline should be “America runs on Trucking.”

Back by popular demand